skip to main | skip to sidebar
The Arsenal Blog Contributors: Shakeel and pk_gunner

Finally a team that won't kick the lumps out of us. Our only chance is to keep the difference of MIN two goals in the first legand make Barca don't score more than two. Sadly with Clichy's shitdefending I can see Messi and Alves running riot on the left side.

Not that Barca's defending is great too and I expect Walcott's pace to terrorise them but they have finishers who can put the ball in the back of the net while we have Bendtner and no offence even with his recent form I can hardly imagine Barca having nightmares about him. I expect Arshavin, Nasri to step it up, if they do along with Cesc I am very confident.

Overall, I see a goal-fest at the Emirates and VERY hard trip to Camp Nou,

As for Henry, give him a warm welcome and forget him for 180 minutes, HIs job will be to go out and beat us and instead of making a banner or something about him we should do one for Cesc, show the lad how much we love him.
Posted by Shakeel at Saturday, March 20, 2010 No comments: Links to this post

As expected wasn't holding my breath, I knew we were going to get pushed aside, failing to overcome Chelsea's physicalness. Clichy played absolute pants as usual, can't run can't defend, can't cross. I'd rather Wenger had gone with Sol in the middle with Gallas on the left with Eboue replacing the totally inept Sagna.

A few times Walcott tracked back with Sagna nowhere to be seen. We might as well have been ten men with Clichy doing fuck all. Zero effort. Disugusting for those who spent their good hard money and went to the match.

Then there is Wenger's 'excuses'. For those dim-wits blasting Arsene. Think. For a moment. Wenger knows more about football than you or me, if we see the utter shit that Arsenal have become than surely he sees it too. Its OBVIOUS we have squat for transfers and he's covering up for the monoey grabbing idiots of the board. It doesn't take a genuis to see we need a few signings, a striker, a DM, a left back if Clichy's shit form is anything to go by.

Titles over personally. Man Utd are in their usual latter season roll, Chelsea look solid, we look a joke. Lose to Liverpool and we'll be 2 points behind them.

OT, worst game Ive been to this season

Wrote this on an Arsneal place but here it is anyway..

I sat in the E30 section, I can safely say this was the worst away match Ive been to this season. All the Arsenal fans who had bothered to sing were sitting on my far left, further down. The place where I was sitting was full of muppets and cunts who did no utter a SINGLE word through out the game. Whenever people sung to the Mancs 'your support is shit' the Mancs sitting infront of us used to turn around and smirk at the cunts sitting in our section as if to say your support isnt fucking great either.

To top it all of come half time this woman comes down and has a chat with my brother and me. She called us gimps and cunts for standing throughout . NOw her being a woman n all we didnt say anything but she wouldn't shut the fuck up, we asked her how the fuck can she not support Arsenal by singing etc. After that se sat down infront of us and read a magazine all throughout the game. There are Arsenal fans, proper ones, who can't go to games and here we have muppets reading magazines all through the match Reminds of what was said in the 'Theatre of Silence' that football to some cunts is no different to going to cinema and watching a film

Though well done to the some of the fans, not from my section obv, for giving excellent support through out the game

With Villa cascading into mediocrity 4th place should be ours now. One interesting thing to note is the lengths of delusion to which fans of a club will go to is amazing: Villa fans in this case. I spent some time on Villa talk and some the crap is unbelievable. They would have you believe that we are incapable of beating any of the top 3, player for player Villa are better and load of other bollocks!

Talking of players I was saddened to hear the worthless lazy money-grabbing mercenary Adebayor returning from injury. The bloke's useless. I have defended him in the past because of the way in which he worked his arse off; but now he's useless. 6 ft and he can't even win a header, doesn't bother to run. He seems to be living in his own fantasy world where he's a worldclass player (yes he's said it) and its cringing to hear plastics singing 'Adebaayoor give him the ball n he'll score', more like give him the ball and see if he even bleedinghits a barn door.

Glad to see Eboue and esp Bendtner shutting up some critics. Next up City, should be easy 3 points.
Posted by Shakeel at Tuesday, March 24, 2009 No comments: Links to this post 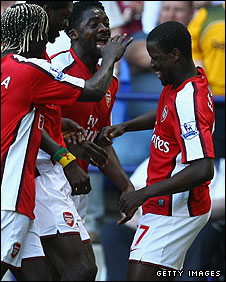 Another win and a pretty good performance by the Arsenal, looking good so far this season.

Kevin davies (scum) scored for Bolton from a corner and as usual we couldnt deal with him, he won just about every header throughout the 90 minutes. We then went on to hit the post twice in a a matter of minutes before scoring twice within 60s to suddenly go into a 2-1 (and well deserved) lead. Eboue was quality today, his passing was good as were his touches and the way he went past players. Seemed to be everywhere today too. He was on the left, he was on the right and he certainly made Ronaldo look shite. He seems to have improved a lot and he scored a decent (but offside) goal.

Clichy had to go off because of a reckless challenge by Kevin Davies (scum) but he'll be fine so Sagna moved to LB and Djorou at RB where they both struggled a bit. Cesc was ok-ish and obviously not back to his best yet, Denilson and Song were good with Denilson scoring one and making another. Bendtner and Adebayor were both effective. Walcott was once again really effective after he came on, he's really come on leaps and bounds so far this season and will surely get even better, he along with Adebayor made our 3rd.  Away support was ok, especially where I was but I've heard it werent so good in some of the other sections.

Top of the league at least till tommorow and here's hoping the Chelsea and United game ends in a draw with a few injuries and suspensions at least. The yids at the bottom of the table, top 4 they were having a fu*king laugh.

Posted by Unknown at Saturday, September 20, 2008 No comments: Links to this post

You need your eyesight checked. I said in my earlier post in the blog:

Most (my emphasis on most NOT all) 'fans' in those 'Asian' countries ONLY support Arsenal because our club isn't obscure hence their basis of support is due to the fame of Arsenal --> glory hunters. This is obvious in Chelsea's case, they had no 'fans' or a large fanbase but as soon as £££ arrived and they won something whaddya know we have this huge 'fanbase' coming from nowhere.

Now how the on earth is that racist I have no idea. I'll have a pop at anyone who goes to a match and sits there like a stone. Not sure whether you're aware of a simple fact but cheering and singing for your team HELPS. (FFS). It intimidates the opposition and HELPS your team win. Anyone who doesn't do that is a gloryhunting joke. As for calling Adebayor a cunt, I and real Arsenal fans will call him that and any scum who plays for us while looking to go elsewhere for money.

You said: ''My point all the way through was that everyone should be allowed a point of view even if they don’t stand up during 'if you hate totscum' ect.ect.''

Its a free world. People can have any view they want but I don't agree with yours.
Posted by Shakeel at Friday, September 19, 2008 3 comments: Links to this post

At the idiot who replied:


'Arsenal God' hahaha, nice one that.You try and make it sound like I hate asians and that Im sort of racist twat. Thats not the case, at all. I just think MOST foreign fans are glory hunters, and they are. The majority wont know a thing about our history. If Arsenal are playing in league 1 after 15 years, I wonder if our support across Asia will still be there.


Arsenal away fans are best...its a magnified view if 3-4000 who are mainly
singers who sit in the same area, dont kid yourself these same people are there
week in week out at home along with another 10,000 hard corer's. You need the
numbers made up though and if you dont you have that you are crappy Blackburn
Wigan Bolton ect no floating fanbase.

Arsenal away fans are the best yeh. I've never said that these people are the same ones at home along with '10,000 hardcores' nor have I ever denied the fact that you need the 'other sort' to make up the numbers.

Short memories also.... whilst the halcyon days of Wengers reighn have seen
difficulties in getting Highbury tickets for a 38,000 odd game take a (even with
TRS)look back to the early 90s before the new north bank and a simple posted
cheque could get you a ticket for the Man utd title clincher....look further
back to the mid to late 80s where you could queue to walk on to the North bank
and stand with all the passionate singers swaying backwards and forwards but
also remember these times saw crowds of between 25,000 for Luton to a 53,000 for
the visit of Liverpool weeks later.

I know all this, I dont even know why you mention it.

Arsenal fans faces may change but the same commitement from the likes of me you
and people that make up the numbers these shouldnt been treated with contempt as
you and the other idiot have ...

Me and the 'other idiot' treat their commitment with contempt because the majority will only be showing commitment till we're in the top 4, I know that and you know that and what pisses me off even more is that some of those wankers will have a go at some of the proper Arsenal. Cunts.

Oh and because you shouted at a player whoopee doo 'lads' wouldnt be involved
at a friendly grow up quick toss pot and have some respect you make me sick
youve been watching to many football factory films ......

When did I say shouting at a player makes me all tough or whatever the fuck your thinking it makes someone? Shouting at players takes place at football games all the time, doesnt make anyone 'proper'. I dont know why you even bring this into it and where does the football factory stuff come in lmao.

I'm pretty sure I know who you are, though I wonder why you didnt post all this earlier in the massive discussions.